HM Treasury’s Asset Management Taskforce was set up in October 2017, with an overarching objective to maintain a thriving UK asset management industry.  As part of its commitment to help the Taskforce achieve its objectives, the IA established the UK Funds Regime Working Group (UKFRWG), comprised of senior figures from the asset management industry, as well as Government, the FCA and the Financial Services Consumer Panel. 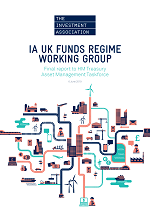 The Group submitted a report to the Taskforce in June 2019 which offers a set of concrete proposals to government and regulators on how to retain and improve on UK fund industry competitiveness, from both a domestic delivery and international customer perspective.  While all of the proposals would be relevant even without Brexit, Brexit gives the questions – and recommendations - an additional importance.

The Report makes clear that the future of UK competitiveness relies on the sum of many parts rather than tackling issues individually.  It sets out a blueprint with specific actions in three thematic areas, including two significant additions to the UK fund range:  a new Onshore Professional Fund regime and a Long-Term Asset Fund (LTAF)

During 2020, the IA has produced a new paper on the LTAF and a summary sets out the key elements.

While innovation can often take place without the need for specific policy, regulatory or tax changes, some areas require greater facilitation. Reflecting current and anticipated future needs of customers in the UK and internationally, the UKFRWG puts forward specific proposals for two new fund structures that will help to ensure the industry can deliver effectively:

Detailed work on the retirement income market by the Group suggests that there is scope to facilitate further innovation in the drawdown market with changes to the way in which income and capital are treated within funds, thereby allowing a more targeted approach to the delivery of sustainable income throughout retirement.

The Report identifies a number of areas where enhancements can be made:

While the Report concludes that UK authorised funds are already capable of meeting the needs of retirement customers to a significant extent, the Report identifies a range of enhancements to help pension schemes and retirement investors benefit from more efficient investment strategies. These include minimising tax leakage in investment funds, enhanced flexibility around distribution of capital as income to allow for innovation in retirement-focused funds and progress of the LTAF in conjunction with amended permitted links rules for life funds.

Success of improving the competitiveness of the UK fund regime is also conditional on two crucial additional elements outlined in the Report:

HM Treasury Review of the UK Funds Regime: A Call for Input

In January 2021, HM Treasury issued a Call for Input into the UK Funds Regime.  The Call for Input builds on the work of the UKFRWG, along with other industry proposals and discusses changes to the UK funds regime covering three areas:

The IA issued a circular, which explores the details of the paper.

The IA responded to the Call for Input in April 2021. The response can be found here.

D2F originally formed a part of the UKFR work, and is the proposal to produce an optional alternative dealing model for UK funds, removing the AFM from the deal and thereby eliminating counterparty risk and increasing the attractiveness of the UK as a fund domicile.

More detail on the proposals, and recent activity can be found here.